MUSEUM OF THE IONIAN UNIVERSITY
LINOTYPE 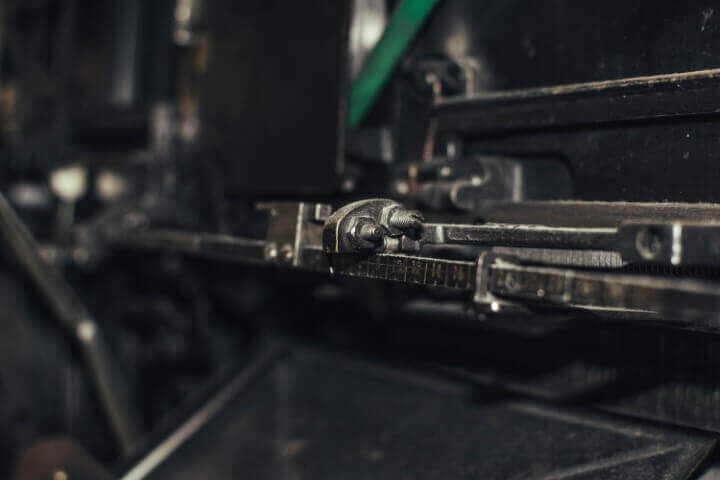 Linotype is one of the most important inventions in the history of typography. The linotype machine was realized in 1884 by the German watchmaker Ottmar Mergenthaler and constituted a truly pioneering invention for its era. Until then, typography was a slow and painstaking process that required the work of many skilled people, yet not resulting in a great number of copies. By contrast, linotype machines produced more copies in a short period of time, and did not require the labor of several individuals in order to operate efficiently.

The feature that made the linotype machine stand out from the previous machines intended for mass production of the written word, was the fact that it did not print one letter at a time on the paper, as was the case with the typewriter, nor did it generate text in the typical way associated with typography until that time, but through a series of letters. This is, after all, how it got its name, as a “line of types.” Linotype thus means indeed, a line of characters. It’s use became even easier on account of its keyboard, which was quite similar to the one used in typewriters. In this way, even a single person was able to produce text with speed and ease: in a linotype, the process became at least 5 or 6 times faster). Because of this technological breakthrough, many were worried about losing their job in printing presses, as this would reduce the numbers involved in operating these machines. This did not happen however, since public demand for printed material increased. In a short period of time, key texts dealing with social, political and religious subjects were disseminated to the general population, thus giving people the chance to be informed, and to form their own views or take an active part in developments within a society. Linotype was not merely another invention, but a path to the beginning of a new era, one defined by modernization and far easier access to information.