MUSEUM OF THE IONIAN UNIVERSITY
THE TYPING MACHINE (OFFICE MACHINE/TYPEWRITER) 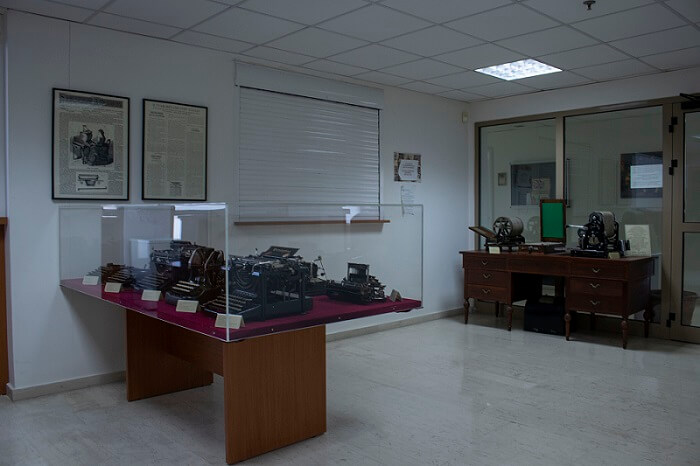 The birth and spreading of typography remain an integral part of the history of writing, eventually leading to the idea of constructing another means of distributing information: the typewriter (office machine). The exact date of its invention remains unknown, but the first designs and patents for building it were attributed to the Englishman Henry Mill, circa 1714. Mill tried to create a machine that could mimic the process of text production as occurred in the printing presses of the time.

Although his efforts were important for the course leading to the creation and use of the typewriter, he was not ultimately successful. And thus, the first fully operational engine was created by the Italian Pellegrino Tyrri in 1808, yet refinement of the apparatuses dates back to the late 19th century. In 1873, Eliphalet Remington built the first industrial typewriter model (mass-produced), which was later, in 1989, improved on by John Thomas Underwood.

Towards the end of the 19th century, typewriters were used one at a time, mainly by companies and services, and purely for professional use. Very rarely there was personal use by a member of the public. After the middle of the 19th century, new models were created, lighter and clearly easier to use than the ones in previously in existence. This resulted in a considerable increase in the use of the typewriter in both the professional and private sector.

The 20th century is considered to be the "golden age" of the typewriter, given its widespread use throughout the world by then. The power and significance that his equipment had acquired can be perceived from the fact that it was often featured in the cinema of the time (Greek cinema as well) as a necessary element of daily life for many people, in their work and personal space. Greece was not among the many countries that were factory-building their own typewriters, and so resorted to importing typewriters from abroad that featured Latin or Greek keyboards. Greek keyboards usually followed the French alphabet (AZERTY) until about 1960, with the QWERTY system adopted later, with minimal interventions following further on, such as e.g., the abolition of accents belonging to the polytonic system. Greek typewriters became famous in the 1980s, mainly because of the demand for books.

At the end of the 20th century the typewriter began to be replaced, gradually but steadily, by the computer.